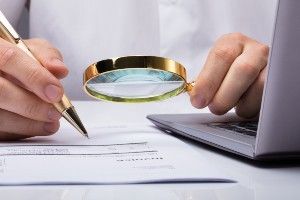 Bankruptcy cases are handled in a bankruptcy court, but rarely do people who file need to make a traditional court appearance. There is no jury or witness stand and the closest you’ll come to testifying is at your 341 Meeting of Creditors.

However, there are cases in which the bankruptcy trustee calls a Rule 2004 exam and the purpose is to get the answers to questions about a bankruptcy case.

As you already know if you’ve researched bankruptcy or you’ve begun the process of filing, you’ll need to attend a 341 Meeting of Creditors. This meeting is a short meeting where the trustee confirms the information included in your bankruptcy schedules. In some cases creditors are at the meetings, but this happens less often many people realize.

The entire point of the 341 Meeting is to verify the information you’ve submitted. The majority of these meetings, especially when it comes to Chapter 7 bankruptcy, are simple.

For most people, the paperwork submitted and the Meeting of Creditors is enough to move the case forward and allow the court to discharge debt. However, there are times when this is not enough and additional questions arise. They might be informal and the trustee will simply ask your attorney to provide additional information. But the questioning can also be formal, which is where Rule 2004 comes in.

Rule 2004 is an opportunity for the trustee to further examine your case. They can dig into information associated with your property, finances, bankruptcy schedules, and ability to pay your debts. They can call in third parties and discuss your financial situation with them if they have information that might be useful. Rule 2004 exams are an opportunity for the trustee to determine if you’ve abused the bankruptcy system or if your case is one of financial mismanagement.

Keep in mind, the trustee isn’t the only one who can request a Rule 2004 exam. Any party with a legitimate intereset in your case can file a Rule 2004 motion. You can even file one in your own case. Anyone directly affected by your bankruptcy case has the option of filing a 2004 exam motion and the court can order an examination if there are concerns with your case.

How is Rule 2004 different than the 341 Meeting of Creditors?

Rule 2004 motions allow the court to dig further into a debtor’s situation. It opens the door to speak to just about anyone affiliated with your debts and assets. For example, the court might speak with:

The court has the ability to subpoena anyone who refuses to speak to them concerning your debt. It can also subpoena any relevant documents associated with your case.

If you’d like to review what goes on at the 341 Meeting of Creditors, check out this rundown from AllLaw.

Should You Be Concerned?

In most cases, someone filing for personal bankruptcy doesn’t need to be concerned with Rule 2004. As long as you’ve been open and honest with your attorney, the Meeting of Creditors will be the most invasive look into your situation that you’ll endure. Rule 2004 exams tend to occur when the court suspects someone has made false statements, concealed assets, destroyed records, or is unable to produce requested information.

As long as you’ve made a good faith effort to file bankruptcy according to the law, chances are you don’t need to worry. But it’s still important to be working with someone who understands bankruptcy laws. Even with the best intentions mistakes are possible and the wrong mistake can lead you down a risky path and call your case into question.

For more information about Rule 2004 or to speak to someone about filing for bankruptcy, contact the bankruptcy Law Office of Robert M. Geller at 813-254-5696 to learn more.